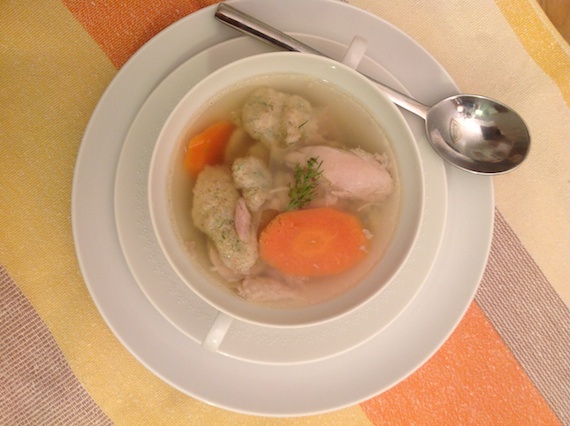 Winter may be drawing to a close, and the weather may be getting warmer, but from a Chinese medicine perspective this unpredictable seasonal change is an important time to eat healing, balancing soups. March is crazy like that: the wind is still whipping, there’s a chill in the air, and there’s still that nasty cold/flu/virus going around. There are actual snowstorms followed by 55F days with bright sunshine and clear skies! It’s bonkers, and it’s times like this that eating warming, simple soups will keep your body strong, fortified and grounded. Chicken soup can be made at a moments notice with little effort and preparation, and often there are plenty of leftovers which can be stored in the freezer, to be thawed at a future time of emergency healing need. 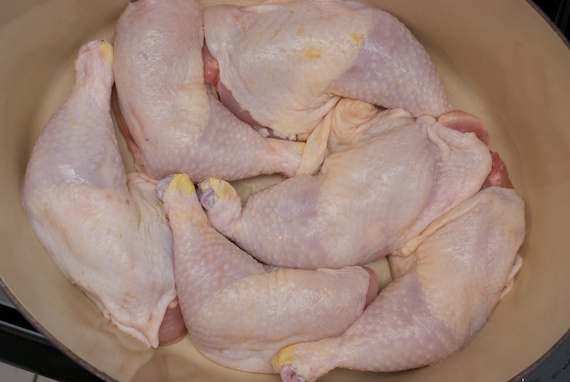 As a kid, whenever I was starting to get sick, my mother would put up a big pot of chicken soup. Her soup was not like the typical brothy chicken soup – she threw in dried mushrooms, tons of dried herbs and large chunks of vegetables like carrots and celery. She didn’t strain the soup either, just shredded the meat off the simmered chicken legs, and added it back to the pot. It ended up more like a stew, and it always did the trick. I’ve continued this tradition of throwing together a pot of chicken soup when Matthew or I start feeling a cold coming on and need a little food support, as I did a about a month ago when I was feeling run down. 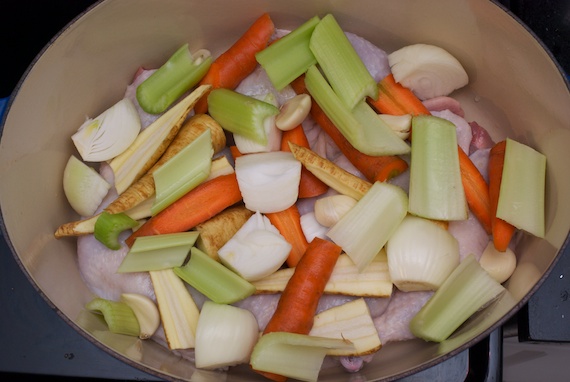 So what’s really doing the healing here with this Jewish Penicillin? Is it the warm liquid of the broth that helps clear stuffed nasal passageways? Is there some stort of inflammation-mitigation from chicken soup which lessens the cold’s symptoms? Is it the nutrients in the vegetables themselves? Is it that chicken soup balances the body’s constitution?  Is it the comforting of a familiar food ritual? I would argue that it’s all of the above, and more probably. Chinese medicine builds herbal remedies much the same way as chicken soup. Six, eight, sometimes up to fifteen or twenty herbs work synergistically in an herbal decoction, just the way the chicken, vegetables and herbs play off each other to create this rich, complex, healing soup. 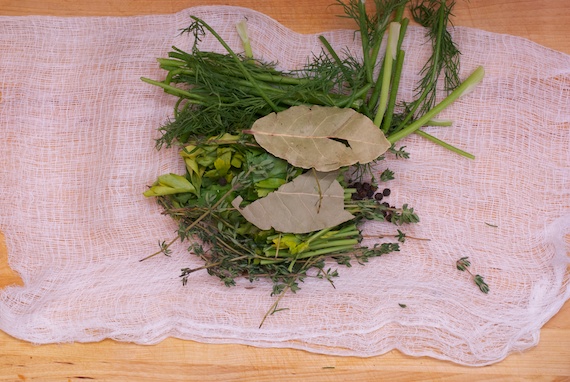 The Chinese approach to treatment in general is whole-foods based. In traditional herbal formulas, the actual branches, twigs and leafy herbs are boiled into a tea – kind of like a bouquet garni, right? My bouquet garnis tend to be huge herbal packages that I tuck into my soup as it cooks. In this version, I used parsley stems, thyme, black peppercorns and dill, all wrapped together in a cheese cloth, which I fished it out at the end. Sometimes I throw in other healing ingredients like ginger, goji berries and dried shiitakes for a super-souped up bouquet garni. 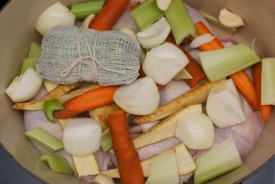 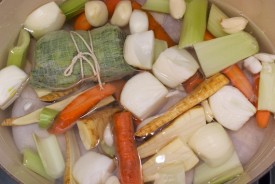 One of the great things about chicken soup is that recipes are not necessary. At the most basic level, soup is just vegetables, herbs and spices (and sometimes meat), simmered in water on the stove-top. While you can add a additional steps to that basic formula (sautéing or roasting the vegetables first, straining the end result, adding noodles or dumplings or rice or matzoh balls), you don’t have to. And as you can see through the pictures above, my chicken soup is pretty basic. I first lay the chicken legs, then whatever veggies I have around, (in this case carrots, turnips, celery, onions and garlic), salt it up, add the bouquet garni, cover with water, and bring that baby to a boil. 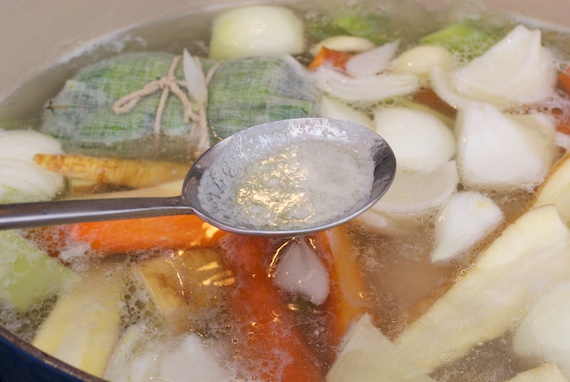 After the soup comes to a boil, you will notice some white, foaminess come to the surface, especially around the edges. Skim that foam off! I am a proud soup skimmer. Not only do I think that skimming creates a cleaner, clearer broth, but I love the zen of the skimming itself. When I skim, I think about life, about soup, about this, about that… It’s my little moment of cooking-meditation. Once skimming is complete, cover the pot, and allow the soup to cook on low for a few hours. 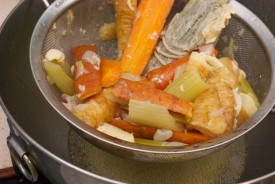 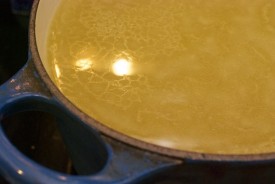 When the soup is done, strain the broth and pour that golden healing liquid back into the pot to cool. You might notice some fat coming to the surface – keep it there – This fat is good stuff which will help keep you strong. But if you are super sick, very weak or recovering from a serious illness, skim the fat off. According to Chinese medicine, when you are extremely weak, even chicken soup is to heavy to easily integrate and digest. To serve, you can eat/drink the broth on it’s own in a mug or bowl, or it can be bulked up by adding carrots, and/or dumplings/noodles, and/or fresh herbs. Above, I decided to add dill spåtzel, which I had never made before, but which I felt like would provide the right accompaniment to the broth. While they didn’t come out like I wanted, they were delicious. (For some reason I didn’t take pictures of the spåtzle-making-process, but this post is super-long anyway, so I’ll do a separate spåtzel post in the future when I try my hand at it again.) 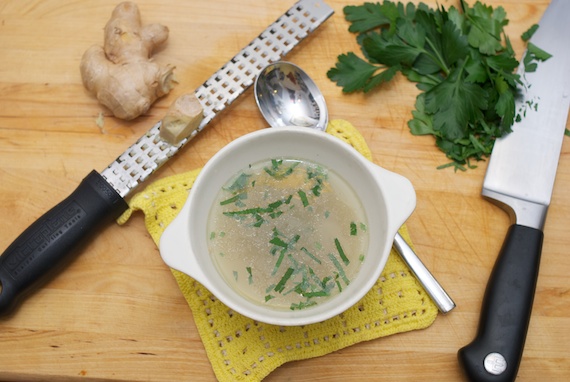 We went through the first batch of refrigerator soup within a week, and I never did end up getting sick. Then, yesterday with this crazy March madness, I felt that ominous tickle-in-my-throat-maybe-I’m-coming-down-with-something-thing, so I reached for my emergency stash of frozen broth (STAT!), reheated it, garnished it simply with fresh grated ginger and chopped parsley. No fuss, super easy, and voila – the pantry pulled through with a prescription! And I AM feeling better today.

Note of chicken vs. vegetable soup: This formula can be followed without the chicken for sure, and the end result will be a delicious, rich, healing vegetable soup. I often make vegetable soup like this, but in these cooler, winter months and during this seasonal-change-craziness, I do like to add some meat to my soups to give them a more warming, nourishing quality. When adding chicken to my soup, I use legs from Fleisher’s, a butcher in Brooklyn that sells sustainably-raised, pastured chicken. I source my meat from there for ethical, environmental and taste reasons, and I would encourage you to use the best quality chicken that you can find.