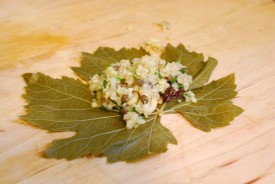 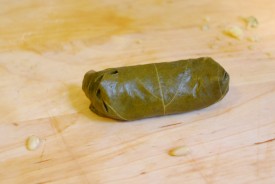 I love stuffed grape leaves (dolmas), and I always have at least a couple of cans stocked in the pantry. While dolmas can technically be stuffed with anything, I’m referring to the grape leaves that are stuffed with rice and various herbs, usually bought canned soaked in oil. Dolmas are one of the few ready-to-eat foods we buy, and I regularly turn to them for a great hors d’oeuvres when unexpected guests stop by, or as a desperate straight-from-the-can snack. I never actually made them though, and the thought hadn’t even crossed my mind until I saw a jar of grape leaves soaked in brine at the supermarket a few months ago. So I bought them, and they sat on my shelf for a while, until I was struck with inspiration on Friday as we were having vegan dinner guests for Shabbat. So with the help of Vefa’s Kitchen, and some extra time on my hands, I concocted a whole grain version of dolmas using quinoa, lentils, raisins, pine nuts and herbs. 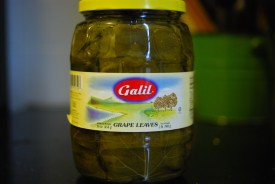 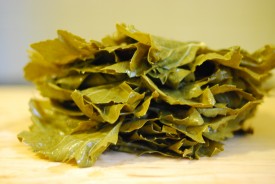 First, the grape leaves need to be rinsed, the stems removed, and the leaves blanched in boiling water, a few at a time, then drained and cooled. 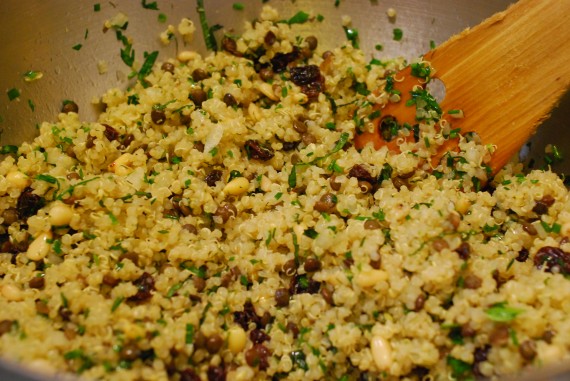 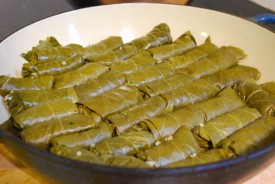 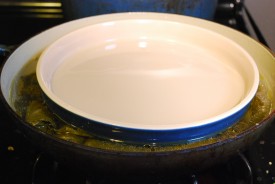 To roll dolmas, place about 1 tablespoon of the filling in the center of a grape leaf and roll up (like a burrito–tucking the sides in as you roll up). The rolled-up dolmas are then placed (seam side down) in a large pan lined with grape leaves, and something is placed on top to prevent the dolmas from unrolling during cooking (I used a large pie plate). Next add boiling water, lemon juice and olive oil into the pan, and cook covered over a low flame for about 40 minutes. When done, turn the heat off, and after about 15 minutes, uncover, remove the pie plate, and transfer the dolmas into another container. 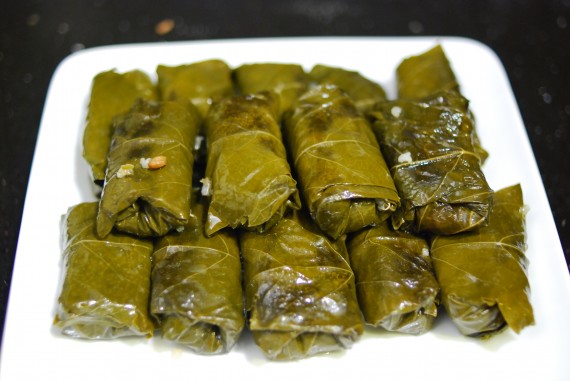 They were pretty good Friday night, but the flavor really developed over the next day, and by Saturday night they were outstanding. Compared with the canned dolmas, these were less oily, and the leaves were slightly tougher, but they were still delicious. Would I make them again? Maybe. I’m a sucker for a dish that you can throw anything into and grape leaves are just another vessel for whole grain goodness. But these were a lot of work…you can bet I’ll still be keeping the canned version in my pantry.