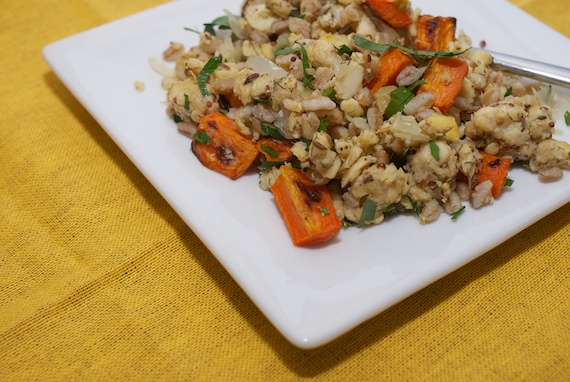 While I might catch flack for saying this, tempeh is the Rodney Dangerfield of vegan protein sources. Whether it is because people are more familiar with the other vegan protein that starts with a T (tofu), and so they confuse the two, people don’t know how to prepare it, or that it’s not often served in non-vegan restaurants so the general public just doesn’t know about it, but it just seems like tempeh don’t get no respect. I’d like to help change that unfortunate situation, and thanks to my afternoon plans, you guys will know all about tempeh soon enough! SPOILER ALERT! Part II of this series will be about my experience MAKING tempeh with Barry of Barry’s tempeh! I have been a huge fan of Barry’s delicious, organic, locally-made tempeh after buying a few packs from him last year at the New Amsterdam Market. When I saw him at the Queens E-Space event a few weeks ago, I re-upped on my tempeh, and we were chatting a bit, and I practically fell over when he invited me to help him make the stuff, which I’ll be doing this afternoon! I can’t wait to learn from Barry the Tempeh Master, contribute to his incredible product, and share with you a bit about the tempeh-making process. 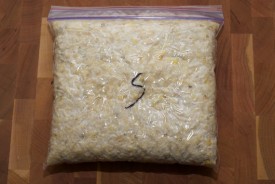 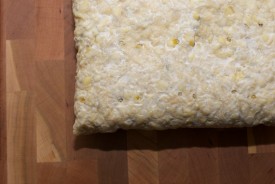 So now, let’s talk tempeh. Tempeh (pronounced tem-pay) is a traditional Indonesian fermented soy product with a whole lot going for it: Tempeh is unprocessed; it’s made from the actual beans (as opposed to tofu, which is made from the “milk” from soybeans)… what that means is tempeh is very high in protein and fiber. And since tempeh is fermented, it’s a super source of beneficial gut bacteria and is easy on your digestion. Its texture is similar to a bean burger, and it is a wonderful meat substitute since it holds up well to slicing, cubing, pan frying, roasting and crumbling while maintaining it’s pleasant, firmness. Tempeh is often sold in different flavors, which use slight variations in the recipe (more on that in part II).  Barry offers 3 tempeh flavors: the traditional soy, a soy-oats-and-barley, and a soy-free white bean-brown rice. Barry makes his tempeh by hand from organic beans and grain from Cayuga Pure Organics, and sells the 1-pound packages frozen. 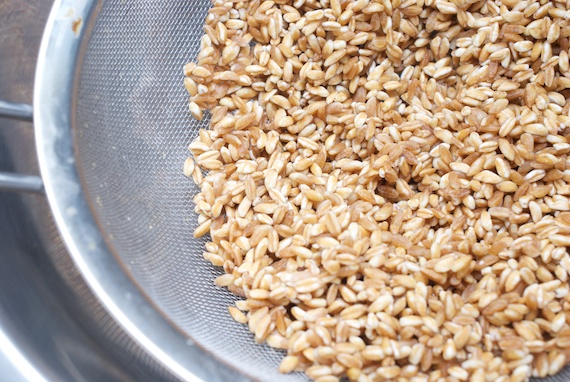 Tempeh is pretty “meaty”, and holds up well to bold flavors. Often I marinate then roast tempeh, but another way I like to eat tempeh is crumbled into a pan and sautéed until crunchy. This warm tempeh salad idea was inspired by the flavors of the classic reuben sandwich, as well as the excess of carrots I have in the house (we got 16 pounds last week from our CSA – I’m not complaining!). I initially wanted to make the salad with rye berries to echo the traditional rye bread of the reuben, but when I went to the pantry, we were out — we’ve been eating grain like crazy pre-passover. Alas, I had farro, so I rinsed it and threw it in the rice cooker. 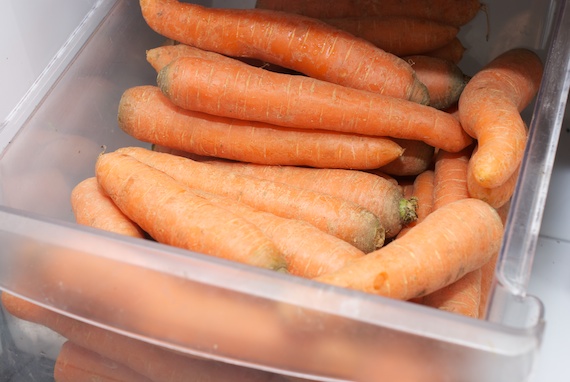 I told you I have a lot of carrots – and that’s not even all of them! I diced up the carrots and tossed with extra virgin olive oil, salt, pepper, caraway seeds and garlic and roasted in a 400F oven. 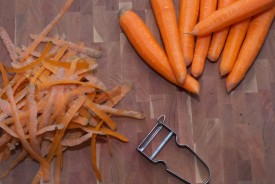 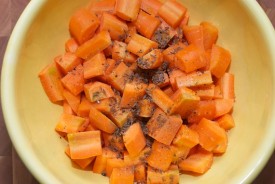 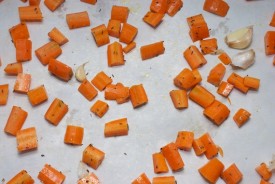 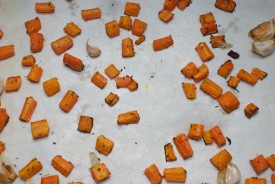 Can you find the carrot I tasted that’s missing from the picture on the right? YUM!

Meanwhile, I crumbled up the tempeh and tossed with a dressing heavy with whole-grain mustard, caraway seeds, garlic, extra virgin olive oil, apple cider vinegar, salt and pepper, and sautéed in a hot pan until warm and crunchy. 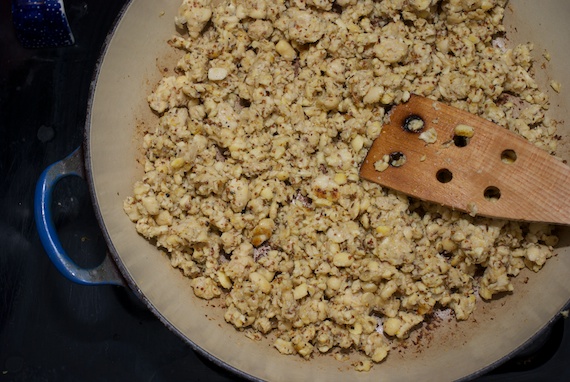 Once everything was cooked, I mixed it all together, added some chopped parsley, home-fermented sauerkraut, black pepper, and a splash of apple cider vinegar. The resulting salad really was reminiscent of a ruben, with the caraway, mustard and kraut coming through. Now that I’ve cooked with Barry’s tempeh, I can’t wait to see how it’s made…Stay tuned! 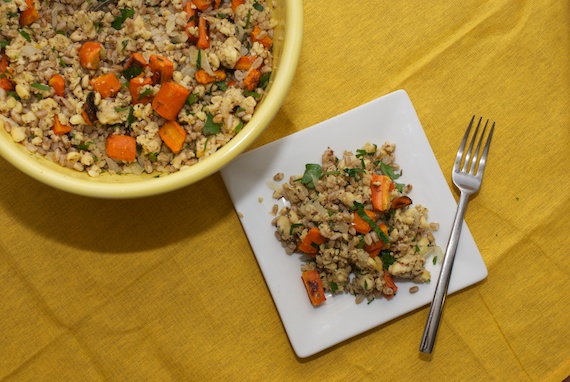